Sorry, you need to enable JavaScript to visit this website.
Skip to main content
You are on our Irish Site

When
March 3rd, 2021 8:00 AM   through   9:30 AM
Where
Event Fee(s)
Contact Details
Next in our exclusive series of Emerald Leadership events, we'll explore the sea-saw effect of being efficient while being compassionate, patient and trying to juggle it all. This event is time out for you to learn the ‘Why’ and ‘How’ to expand your toolbelt of resources that you can access during those times when it all feels a bit much. 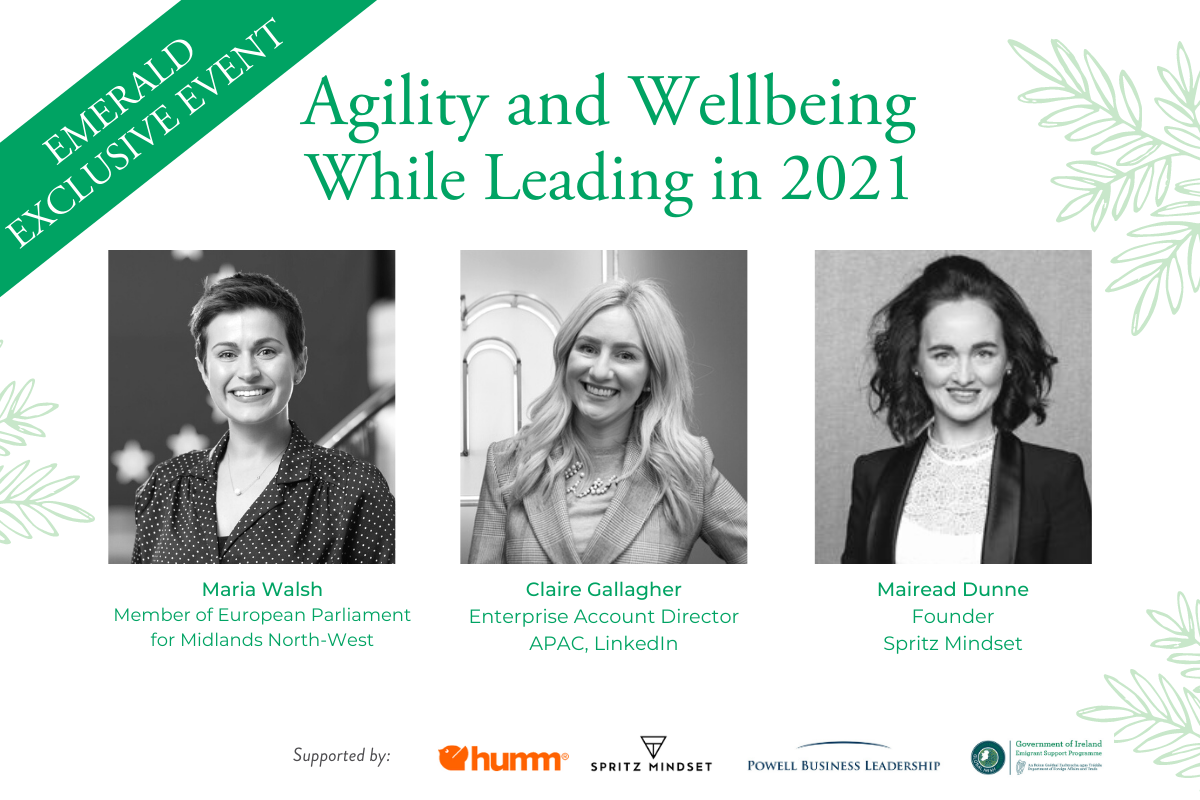 Hear real and raw stories of when it wasn’t done well and how our expert panel have learned and adapted to help in this ever evolving landscape that is 2021.

Emerald Program participants can register via lisa@australianchamber.ie for their complimentary booking to this exclusive Emerald event.

Maria Walsh MEP was born in Boston, USA, but the village of Shrule, Co. Mayo has been home for her since 1994. She graduated from Griffith College Dublin with a B.A. in Journalism & Visual Media in 2009 and went on to a career in television production and creative management.  In 2014, she was crowned the International Rose of Tralee, at the festival of the same name that celebrates young women of Irish heritage. Up until July 2019, Maria served as a member of the Irish Reserve Defence Force in the First Armoured Cavalry Squadron, based in the Curragh Co. Kildare. Maria has been an active advocate and campaigner for diversity and social inclusion for many years. As the first openly gay Rose of Tralee in 2014, she used her platform to advocate for a positive vote in the Marriage Equality referendum in 2015. She was hailed as a role model for young LGBTI people in Ireland and was honoured to be cited as an inspiration for many people’s decision to come out.

Maria was elected as a Member of the European Parliament for the Midlands–North-West constituency at the 2019 European Parliament elections. She is a member of Fine Gael and sits in the European People's Party political group. She is a full member of the Committee on Employment and Social Affairs and a substitute member of the Committee on Civil Liberties, Justice and Home Affairs. Maria is also the Irish EPP representative on the Delegation for relations with the United States and for the African, Caribbean, and Pacific Group of States. In the Employment Committee, she focuses on youth employment and entrepreneurship, fostering an inclusive labour market, and promoting the mobility of workers. One of her priorities is mental health policy, particularly as it affects people's social and working lives. In the Civil Liberties committee, she works on protecting civil rights for those in and beyond Europe, particularly in the area of migration. An activist for LGBTI+ rights in Ireland, she has carried this advocacy over to her work on civil rights.

Claire Gallagher, originally from Belleek Co. Fermanagh, is proud to call Melbourne home since 2013. She moved there with her now husband and they absolutely love their lives here in Australia. She has been working at LinkedIn for almost 5 years and up until COVID hit, she travelled across Australia and New Zealand every 6 weeks in her role.

Claire is also Secretary of Gaelic Games Victoria, part of her Club Padraig Pearses Committee and also still plays. Outside of of work and GAA life, she loves to travel, try the best restaurants in Melbourne, go to F45 and returns back home twice a year (pre-COVID).

Mairead Dunne is the Founder and CEO at Spritz Mindset, where she uses her internationally recognised coaching qualifications to drive lasting change and create real results in people’s lives and business.

In both her professional and personal experience Mairead found a direct correlation between people’s mindsets and living a truly successful life. Mairead brings insight from her work as a Specialist Clinical Nurse Consultant in Palliative Care, Educator and Leader to her role as Founder and CEO at Spritz Mindset. This wealth of experience and expertise has highlighted the need for mindset development in shaping the homes, communities and workplaces of tomorrow.